O Jesus,
I Surrender Myself to You 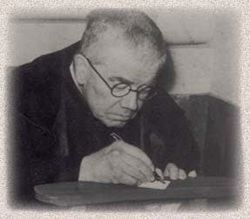 On November 19 1970, Don (Fr) Dolindo Ruotolo died at the age of 88. Padre Pio once said of this
priest from Naples, Italy, "The whole of paradise is in your soul". His name "Dolindo" means "Pain"
and his life was rich with pain. As a child, a teenager, a seminarian and a priest, he experienced
humiliation, which was the realization of the prophetic words of a bishop who said "You will be a
martyr, but in your heart, not with your blood."

In his profound humility, he was able to hear the words of God. Even with his hidden life he was
one of the greatest prophets of the last century. He wrote to Bishop Huilica in 1965 that
"a new John will rise out of Poland with heroic steps to break the chains beyond the boundaries
imposed by the communist tyranny." On this postcard, he wrote words of consolation for Poland
and all countries suffering under the communist regime. This prophecy was realized in the Papacy
of John Paul II.

In his tremendous suffering, Dolindo became more and more a child who lived his self-offering to the Divine Father. "I am totally poor,
a poor nothing. My strength is my prayer, my leader is the will of God which I let Him take me by the hand. My security over the uneven
path is the heavenly mother Mary."

One of the treasures from the words which Jesus spoke to Dolindo was the teaching about total abandonment to God. In this novena, Jesus
is talking to Fr. Dolindo and also to you.

Fr. Dolindo is a candidate for beatification and the Catholic Church has granted him the title "Servant of God".

On this page you will find some of the most beautiful & popular prayers and writings of Padre Dolindo.
More will be added on this page as they soon as they are translated:
​http://www.dolindo.org/english/prayers.html
Powered by